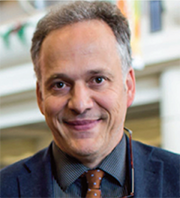 Thierry VandenDriessche, PhD is currently holding several academic appointments. He is a tenured Full Professor at the Vrije Universiteit Brussel (VUB, Belgium), Faculty of Medicine & Pharmacy, where he is Founding Director of the Department of Gene Therapy and Regenerative Medicine. He is also Professor at the University of Leuven (Belgium) at the Faculty of Medicine in the Department of Cardiovascular Sciences. Finally, he was the 2017 Francqui Chair Laureate at the University of Ghent (Belgium). Professor Dr. VandenDriessche obtained his PhD at the Free University of Brussels in 1992 in the field of gene therapy for cancer and was a visiting fellow at the Weizmann Institute for Science (Israel). He continued his research in gene therapy as a post-doctoral fellow at the National Institutes of Health (NIH, USA) where he started his research on gene therapy for hemophilia. He was subsequently recruited to the University of Leuven and the Flanders Institute of Biotechnology (VIB) and returned to the NIH as a sabbatical fellow. He previously served as President of the European Society of Gene & Cell Therapy and was member of the Board of Directors of the American Society of Gene & Cell Therapy and has been committee member of the World Federation of Hemophilia and U.S. National Hemophilia Foundation. Professor Dr. VandenDriessche has published over 130 peer-reviewed publications, including many in high-impact factor journals, and has received several awards for his work. His main research focuses on gene therapy and gene editing for hereditary diseases, particularly hemophilia.