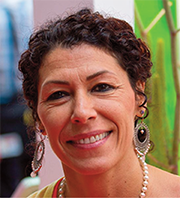 Dr. Peyvandi received her medical degree from the University of Milan, Italy, is certified in Haematology and was awarded PhDs from the Maastricht University, The Netherlands and the University of Milan, Italy for her research in the field of rare bleeding disorders. As part of her PhD thesis, she was a research fellow at the Royal Free Hospital, University College London, London, UK in 1997-98 for molecular characterization of rare bleeding disorders and at the Veteran Administration Hospital, Harvard University, Boston, USA in 1998-99 for in vitro expression studies.

Dr. Peyvandi’s basic and medical science research has focused on the investigation of molecular mechanisms of coagulation disorders. Her research in the prevalence and mechanism of coagulation disorders aims at developing cost-effective treatment for the widespread treatment of patients. Dr. Peyvandi has authored and co-authored more than 360 scientific publications published across well-known specialised journals as well as 18 chapters in various books. Since 1999, she has been invited as an expert speaker at more than 128 national and international meetings and congresses. She has been the successful recipient of more than 40 project grants funded by Italian and International organizations and she was the principal investigator of the Establishment of a European Network of Rare Bleeding Disorders program. She participates in clinical, educational and research activities in different parts of the world and she was Chair of the International Society of Thrombosis and Haemostasis (ISTH) Scientific and Standardization Committee on Factor VIII, Factor IX and Rare Coagulation Disorders. She is a member of the ISTH council, Executive Committee of the World Federation of Hemophilia (WFH), Executive Committee of the European Association for Haemophilia and Allied Disorders (EAHAD), and the Medical Advisory Group of the European Hemophilia Consortium (EHC). In 2014 she was awarded the “Great Hippocrates” that is delivered to the Italian medical researcher of the year.